HAPPY Fall, Y’all! Leaves are falling and autumn is calling, pretty colors fill the air. It’s time for hoodies, flannel, sweaters, and football. It doesn’t matter which Iowa team you cheer for, we all "root" (pun intended) for our Iowa farmers!! One way to show your support is to participate in Iowa Local Food Day on October 11th. I plan on participating in this event. At Little Steps and Beyond Daycare, we will be serving local foods for all meals and snacks that day. I
20 views0 comments
Lauren Kollauf

October is National Farm to School Month, a time to celebrate connections happening all over the country between schools, food, and local farmers! Farm to school enriches the connections communities have with fresh, healthy food and local food producers by changing food purchasing and education practices at schools and early care and education settings. With farm to school, students gain access to healthy, local foods as well as education opportunities such as school gardens,
11 views0 comments
Lauren Kollauf

September is nearly halfway over, so it's time to start looking ahead to October. It’s all about 5-2-1-0! Whether your child care site is new to 5-2-1-0 or already registered and ready for more, there are a variety of ways your staff and students can make “Healthy Choices Count!” during the month of October. October is Healthiest State Month and throughout the month we will celebrate healthy habits, culminating in the 5-2-1-0 Healthy Choices Count! Summit on October 22 at Des
31 views0 comments
Audrey Tran Lam

A note about the author: Audrey Tran Lam, MPH is the Environmental Health Program Manager at the Center for Energy & Environmental Education at the University of Northern Iowa. There’s something about being in the public health field that makes you want to talk to everybody about smoking. Inevitably, I will have at least one conversation about smoking cessation campaigns with every new public health practitioner I meet (either that or cholera, but that’s another story for ano
46 views0 comments
Kelly Hanson

Advocacy is one of those words you hear over and over. It may make you think of a lobbyist, Washington DC or a political rally. It may be one of those words you skip over, thinking-- I know what it means. But what does it really mean? Merriam's definition doesn't offer a whole lot of help in this area either. Early on, Iowa Farm to ECE Coalition members established advocacy as a core value. In other words, a core value is: a statement that makes it clear how we expect members
7 views0 comments 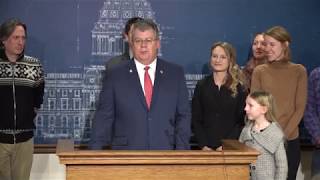 On February 14, 2019 Minnesota state legislators introduced a bipartisan bill supporting farm to school. This was authored by Senator Mike Goggin (R- Red Wing) and Representative Todd Lippert (DFL-Northfield). The bill, House File 811, was supported by several stakeholders including a second grader, a farmer, a child nutrition services director, and a farm to school coordinator. Sen. Goggin noted, "In my hometown of Red Wing, 50 percent of kids depend on free or reduced-pric
4 views0 comments
Lauren Linnenbrink

Early Childhood Day on the Hill

A note about the author, Lauren Linnenbrink is the T.E.A.C.H. and WAGE$ Coordinator with Iowa Association for the Education of Young Children. The Early Childhood Day on the Hill was recently held during the first week of the legislative session on Thursday, January 17th. This was an opportunity for early childhood educators, agencies, organizations, and advocates to come together to discuss early childhood education with legislators. The theme this year for the Early Childho
10 views0 comments
Kelly Hanson

In December 2018, more than 35 advocates gathered at the first Iowa State Advocacy Summit. Did you know: Children who receive a high-quality early education are 20% more likely to graduate from high school and earn 50% higher income Only 59% of Iowa's low-income children are served by preschool programs Attendees also reviewed the current early learning landscape and practiced advocacy skills. One important advocacy skill: How to Meet with Lawmakers. Save the Children Action
13 views0 comments